FAQ
1Does the growing consumption of DeCoto production have any impact on food production?

No, EVA GLORY is aiming to promote the use of non-food crops (second and third-generation feedstock), such as cellulose, for the production of biobased materials. Innovative technologies are focusing on non-edible by-products of the production of food crops (agricultural wastes), which generates large amounts of cellulosic by-products such as rice husks, bamboo and wood residues that can be used to produce biopolymers.

Our H Series contents the usage of tapioca starch derived from cassava where they are grown and imported from Thailand. The paper industries are known for using industrial-grade starch in their products for more than decades, and the starch is not eligible for human consumption, thus the impact on food production is insignificant.

2The benefit of growing feedstock for biobased materials?

Bio-based materials can help to reduce the dependency on limited fossil resources, which are expected to become significantly more expensive in the coming decades. Bio-based materials are made from renewable sources instead of oil and that way gradually substitute fossil resources used to produce plastics with renewable resources (currently predominantly annual crops, such as corn and sugar beet, or perennial cultures, such as cassava and sugar cane).

3How much agricultural area is used for bioplastics / biobased material?

This clearly demonstrates that there is no competition between food/feed and industrial production. A recent report by Wageningen Food & Biobased Research (Bio-based and biodegradable plastics – Facts and figures, 2017) calculates that “even if we would base all present worldwide fossil plastics production on biomass as feedstock instead, the demand for feedstock would be in order of 5 percent of the total amount of biomass produced and harvested each year”. Yet, such scenario is unlikely to happen since the bioplastics industry is also looking into the use of non-food crops (lignocellulosic feedstock), such as wood, straw, as well as waste products and side streams of the agro-industry for the production of bioplastics. Using an increased share of food residues, non-food crops or cellulosic biomass could lead to even less land needed for bioplastics than the numbers given above. 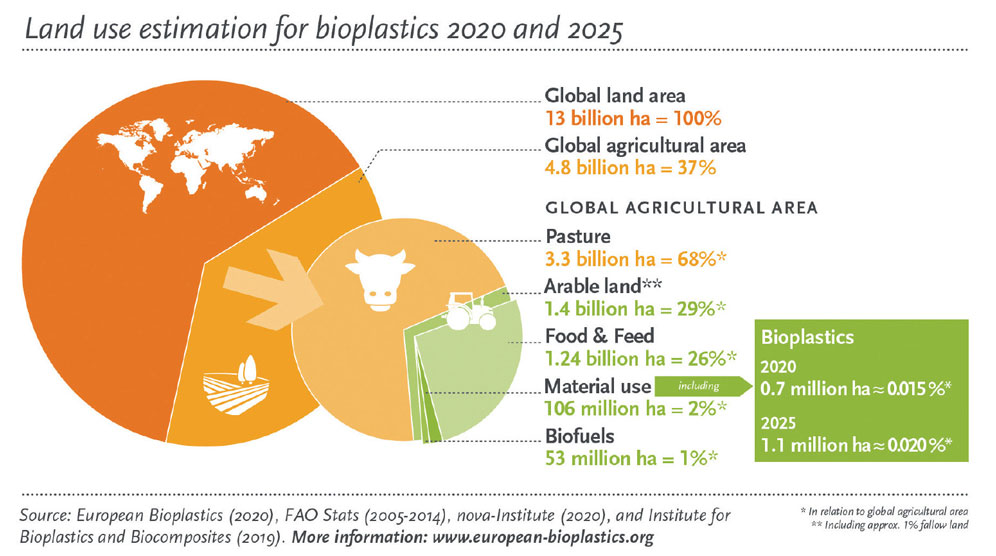 4What are the sources of our biobased materials and where do they come from?
5Is DeCoto made using GMO feedstocks?

No, it is possible to research which types of GMOs are approved for commercial cultivation, which is currently restricted to cotton, corn, and soybean only.

6What is the difference between the use of biobased carbon and the use of fossil raw material, such as oil and natural gas? 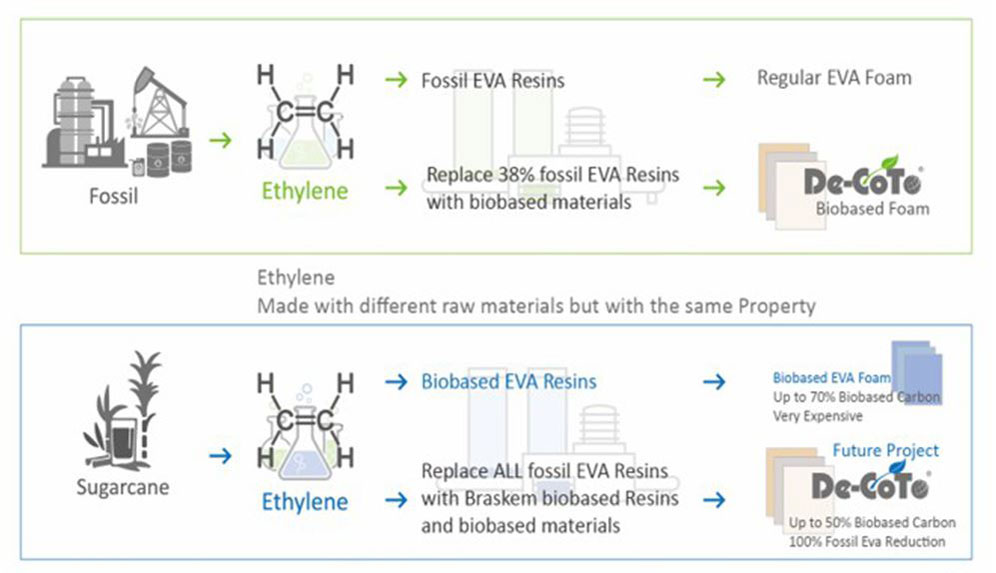 1What are the differences or limitations in the production and processing of conventional EVA foam and biobased foam?

Both types of foam are the same in terms of production and processing, but the difference lies in the source of raw materials. Conventional EVA foam is made from fossil EVA, while biobased foam is made from renewable raw materials. Biobased foam, like its conventional counterpart, can be injection-molded, thermo-molded and be easily processed with CNC. More importantly, through the use of biobased foam, it helps reducing CO2 emission and minimizing CO2 footprint..

1Is DeCoto biodegradable or can it be used in compost?

No, it is not biodegradable or compostable. Like resins made from petrochemicals to produce fossil Eva Foam, DeCoto is still a foam product by its nature, although biobased carbon is used to partially replace fossil raw material, after the chemical transformation, DeCoto biobased foam is still an EVA Foam. However, DeCoto is a recyclable material and in fact, can be recycled normally using the processes in use today, also DeCoto added the ingredients of biobased carbon to reduces toxic substances and decrease carbon dioxide emission.

2What is the difference between biodegradable and compostable?

Biodegradable refers to the ability of materials to break down and return to nature. They must completely break down and decompose into natural elements within a short time after disposal – typically a year or less. The ability to biodegrade within landfills helps to reduce the buildup of waste, contributing to a safer, cleaner and healthier environment.

3Can fossil material be completely substituted by bio-based material?

Yes, Resins for producing EVA can be entirely made from biobased ethanol, and it has the same physical properties as conventional polyethylene made from fossil raw material.

4What are the End-of-Life options for DeCoto?

EVA GLORY’s goal is to achieve the “Closed Resource Cycle” in the future, in which organic recycle is introduced. At the current stage, we offer physical recycle and chemical, the former method is to grind the recycled foam materials or residue into small particles and compressed them into foam blocks that can later be sliced for different thicknesses; the later method is adding those particles back into foam compound to produce new foam sheets. (Please see our recycle foam for more details) 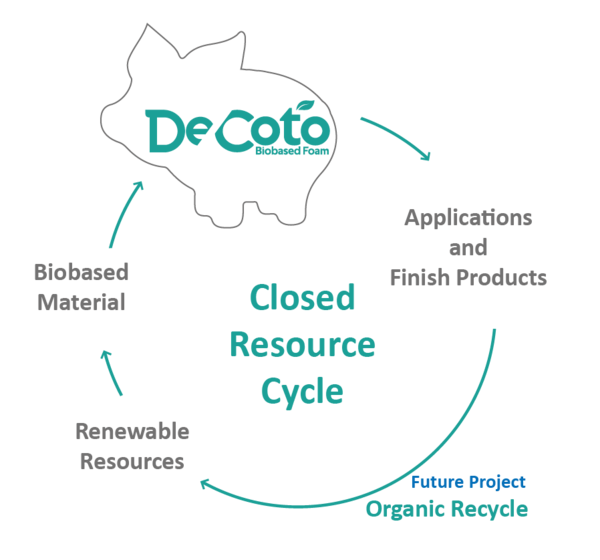 5Is it possible to verify the difference between DeCoto foam and fossil EVA foam?

Yes, DeCoto foam has the same physical properties as conventional EVA Foam made from fossil raw material. Analysis by C-14 carbon dating is the only way to differentiate the two products, attesting to renewable sources of Decoto, since it shows younger carbon atoms in its composition. Eva-Glory also granted USDA Certification for foam intermediates BioPreferred.

6What is the tree CO2 absorption rate?

A single tree can absorb CO2 at a rate of 22kg per year. A single young tree can absorb 10kg of CO2 per year. Tropical forests grow faster than temperate forests and thus bind more carbon. Every forest is different: Soil characteristics and climate influence in many ways the development and composition of a forest. Each tree has a different storage capacity and each tree is different in size and age.

*Source: Trees for the Future @trees.org
*Depends on area and tree types 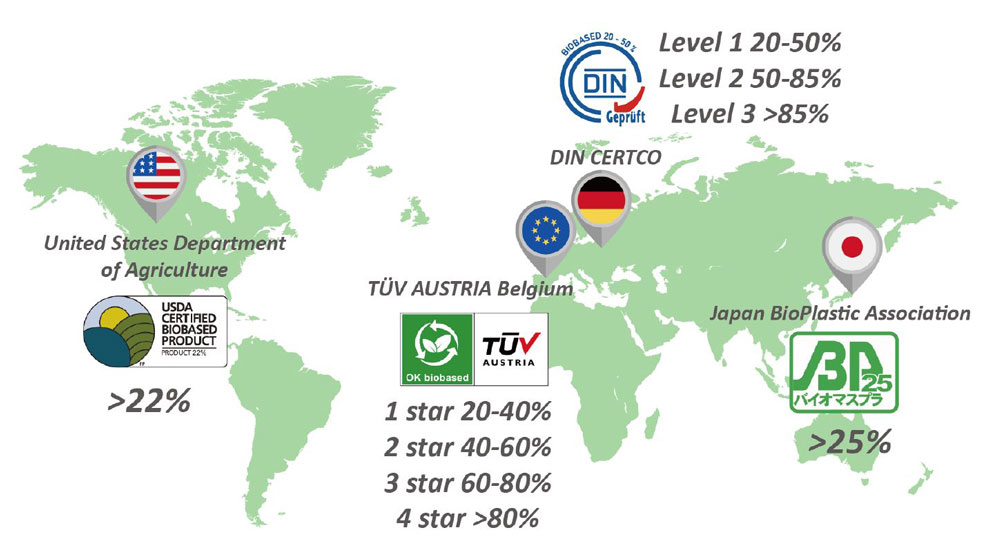